Meanwhile, the tech sector has kept expanding its amount of dividend paying stocks, which now stands at 56% and has the largest contribution of dividends to the S&P 500 in 2012:

Which tech firms represent these new dividend stocks? We’ve listed below the four new payers for 2012, and then the stocks with the highest dividend increases: 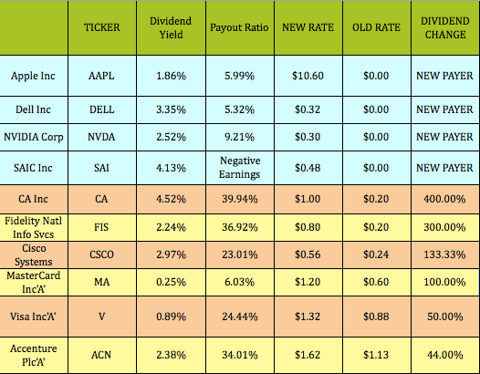 Here’s how these stocks compare for earnings growth, ranked by estimated PEG for their next fiscal year: 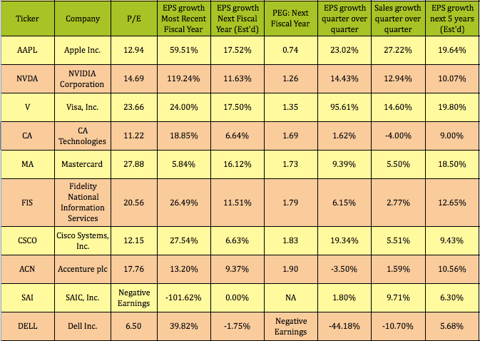 As is often the case, Apple (AAPL), by virtue of its low P/E and strong growth, is at the top of the list. However, Visa (V) is also an interesting growth story due to its 2012 earnings being skewed downward by a big one-time litigation settlement.

On an adjusted basis, Visa’s P/E is around 23.66 vs. the 46- 79 range some of the financial websites are reporting. In addition, unlike Nvidea (NVDA), which has underperformed in 2012, Visa has a strong defensive element — it has done well in rallies and in pullbacks:

With its 44% gain this year, you may want to wait for Visa to dip in price before diving in. At present, it looks overbought on its stochastic chart.

An alternative strategy for capitalizing on the next price dip would be to sell cash secured puts below Visa’s stock price, which will offer you immediate income and a lower breakeven price. Here’s a comparison of two put trades for Visa, which illustrates the difference in actual put option premium money received, their respective annualized yields, and breakevens.

You can find more info on these and over 30 other trades in our Cash Secured Puts Table:

Disclaimer: This article was written for informational purposes only and isn’t intended as investment advice.